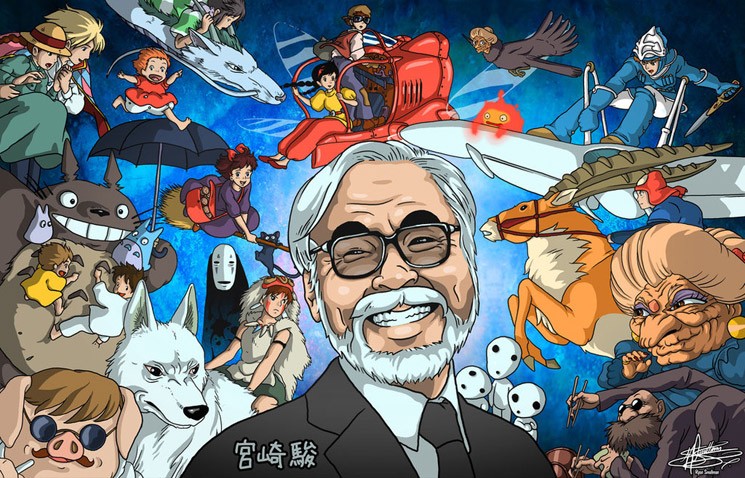 Studio Ghibli movies are widely regarded as some of the most beautiful and imaginative animated films of all time. They explore everything from coming-of-age, to environmentalism, to the importance of family.

Entering the rich and wonderful world of Hayao Miyazaki’s movies on your own can be scary for many. If you’ve finally decided to take the plunge, here are some tips on how to do it right.
On Instagram, you come face to face with Chihiro and Totoro. Your friends can’t stop bragging about their crying fits to the Tomb of the Fireflies soundtrack, and your sister excitedly tells you about Hauru, an emotionally unavailable and seductive wizard. On the other hand, you wonder why everyone is making such a big deal out of it. Studio Ghibli has been delighting fans of all ages for over thirty years with its array of Japanese animated features and shorts. It is headed by the legendary Hayao Miyazaki, surrounded by his trusted duo of collaborators, Isao Takahata and Toshio Suzuki. From its inception, the Tokyo-based company has been the object of a cult following. Since then, it has become a mainstream success, breaking records, making Oscar history and winning over critics and movie fans with a rich catalog of more than 24 films and TV series.
Ask any fan and they will tell you how much the Ghibli movie changed their lives and point out the incredible attention to detail. But watching a few clips of English dubbed films on YouTube won’t capture the essence of the thing: it takes time and dedication. Below is a guide to the Ghibli films that will bring you properly into the world of Miyazaki.

Studio Ghibli’s films are the epitome of Japanese culture. If you can, watch them in their original, authentic Japanese version, with subtitles. Because as another legendary Asian director once said, “once you get past the subtitle barrier,” it will open the door to many more amazing films.

Do you want witches, wizards and magic?

Good news for you, because Studio Ghibli is all about magic: witches, magicians, spirits and strange metamorphoses populate the animated films. And it goes without saying that Miyazaki and his team of directors and scriptwriters don’t skimp on the effects, almost all of which are the result of hard work and high investment. The studio’s biggest and most successful production, Chihiro’s Journey, is brimming with magic, spirituality and the complications that go with it – much like Alice in Wonderland, but with more depth and maturity.

In this movie, a little girl named Chihiro gets trapped in the spirit world and is forced to watch her parents get turned into pigs by the witch Yubaba. Alone, lost and scared (who wouldn’t be), she finds work at a wellness center for spirits and is forced to make big decisions with the help of her new spirit friends.

When it comes to witches and wizards, Kiki the little witch is also an obvious choice from the Ghibli catalog. With her broomstick, black cat and magical powers, young Kiki give it her all. She leaves the comfort of her home to make a place for herself in the world but ends up fighting to survive while doing what she loves. Eventually, however, exhaustion takes over, and Kiki loses her magical powers. She then discovers the importance of taking care of herself to reconnect with her inner-self. The perfect guide for the depressed broke millennial in you. Recommended films: Chihiro’s Journey, Kiki the Little Witch, The Castle in the Sky, The Walking Castle, Aya and the Witch.

Timing: watch when you’re babysitting young witches in the making, on Halloween, or just on a chill Saturday night.

You love nature and ecology?

Miyazaki’s love and respect for the environment are no secret. For him, environmentalism is also about power, and this message shines through in several of Studio Ghibli’s masterpieces: Princess Mononoke, Nausicaä of the Valley of the Wind, Pom Poko and, of course, My Neighbor Totoro. “We never subordinate the natural setting to the characters,” Miyazaki once said in an interview with the Japanese press. “That’s because we think the world is a wonderful place… That the weather, the time, the sunlight, the plants, the water and the wind that make up the landscape are beautiful elements. We strive as much as possible to incorporate them into our work.”
A world shrouded in toxic jungles and dominated by giant mutant insects is the setting for Nausicaä of the Valley of the Wind, Miyazaki’s famous post-apocalyptic tale where life teems and threatens survival of humanity, then on the brink of extinction.
Chihiro’s Journey addresses environmental issues such as water pollution and the abuse of the land through its rivers submerged by human waste. And finally, Princess Mononoke can be seen as a survivalist tale that takes place in a beautiful yet dark world where humans are at war with each other and with the environment.

Trees, meadows, clear rivers and streams: My Neighbor Totoro is full of scenes highlighting the beauty of nature. This beloved children’s film tells the story of sisters Satsuki and Mei. They discover the thrill of adventure when they move to the country with their father while their mother is in the hospital. Along the way, they meet a group of forest spirits and befriend the greatest of them all: Totoro, who controls the elements.

Recommended films: Chihiro’s Journey, Princess Mononoke, My Neighbor Totoro, Nausicaä of the Valley of the Wind, Pom Poko, The Red Turtle, The Tale of Princess Kaguya

Timing: to watch when you need a wave of optimism, suffer from eco-anxiety, or just want to take advantage of a rainy day.

What you should see if you like: Avatar, Pocahontas, Okja, The Adventures of Zak and Crysta in the FernGully Rainforest

Read also
Oscars 2022: What is the problem between Chris Rock, Will Smith and Jada Pinkett Smith?

Want something a little wacky?

One of the great things about Ghibli films is their ability to make you want to be a kid again. Like My Neighbor Totoro, Ponyo on the Cliff is a light and playful – almost absurd, one might say – film: a goldfish princess falls madly in love with a human boy named Sosuke. No one blinks when she ends up endangering her darling’s village while expressing her desire to stay with him forever. A delightful tale in the same vein as The Little Mermaid, but much wackier.

In The Kingdom of Cats, Haru, a shy high school girl, finds herself transformed into a cat after saving one from the throes of traffic. The rescued animal is none other than Lune, Prince of the Cat Kingdom (yes, yes), and the new couple gets married. We’ll tell you right now: there’s no need to try to understand this movie. Just sit back, relax and enjoy the antics of Muta, a big, cheeky cat who turns out to be Renaldo Moon, the notorious criminal who is said to have devoured all the fish in a lake at once.
Recommended films: Cat Kingdom, Pom Poko, Ponyo on the Cliff, Porco Rosso.
Timing: to watch when you feel like being playful, keep kids or need a break from the stress and monotony of everyday life.
What you should see if you like: The Aristochats, cats, films from the Cats & Dogs franchise.
Need badass, independent female characters?
Miyazaki set himself apart directly by creating strong, engaging female protagonists through young heroines who decide their own lives. “I wanted to make a film, especially for my friends’ little girls,” Miyazaki once said, referring to his masterpiece The Voyage of Chihiro, which centers on a girl who must overcome incredible hardship and stress to help her parents.

The witch Kiki, the young she-wolf from Princess Mononoke and the silver-haired Sophie from The Moving Castle are other examples of iconic Ghibli heroines.

In Memories of Marnie, Anna is sent by her adoptive parents to a town lost in the middle of the swamp. There she meets the mysterious Marnie and the two girls spend the summer together. While Anna deals with her depression. Marnie struggles with her secrets. It’s a rare Ghibli approach, dealing here with notions of abandonment, emotional loss and brokenness, brilliantly portrayed as the girls’ friendship unravels before our eyes.
But perhaps the most underrated heroine in all of Ghibli’s films is Takeo, a single Tokyoite in her twenties who finds love and solace in the countryside. A powerful ode to the nostalgia and beauty of childhood, Only a Night is a transformative experience that any woman can relate to.

Its final scene (to a cover of Bette Midler’s The Rose by Japanese singer Miyako Harumi) may well be the greatest and most touching farewell to childhood and innocence ever filmed.

Timing: to watch when you are with friends or need a boost of confidence in your own abilities.

What to see if you like: Anastasia, The Four Daughters of Dr. March, Lady Bird, Moana, To All the Boys I’ve Loved, Captain Marvel.

Are you ready for a dive into history?

Touted as the darkest and most difficult Ghibli to watch, Tomb of the Fireflies has also been proclaimed as “one of the greatest war films ever made.” The film tells of the horror of war and the heartbreak that accompanies this tragedy. Directed by the late Isao Takahata, it follows two starving orphans and their desperate struggle to survive during the final months of World War II

Another strong contender in this category is The Wind Rises, Miyazaki’s bittersweet and moving biopic about Japanese aircraft designer Jiro

Horikoshi. Horikoshi was the chief engineer of the Mitsubishi A6M Zero, the fighter plane that the Japanese military would use during World War II, including the attack on Pearl Harbor. In true biopic fashion, the film combines Horikoshi’s childlike desire to create the perfect aircraft with a story of disappointed love.

In one of the many episodic scenes, Miyazaki manages to recreate the Kanto earthquake (1923), which caused a huge loss of life and was considered the worst natural disaster in Japan at the time. The pain, chaos and devastation are captured and depicted brilliantly in a four-second sequence, which Miyazaki revealed took thirteen months to animate.

The story of a first love set in post-war Yokohama in Poppy Hill will give you butterflies in your stomach. At 16, the cautious young Umi looks after her family at a hilltop boarding house, where she raises navy signal flags daily to wish ships passing through the harbor below a safe journey. She falls in love with her smart, dashing classmate Shun, but a family secret from the war threatens to drive them apart. The story is set in a modernizing Japan immersed in the preparations for the 1964 Summer Olympics, whose picturesque nostalgia is captured in true Ghibli style.
Don’t miss the scene where “Sukiyaki”, the iconic Japanese hit from 1963, is played, which wonderfully evokes sadness and loss.

To see if you like: When the wind blows, The Iron Giant, Persepolis, Parvana, A childhood in Afghanistan (even if these Ghibli ones are really incomparable…)